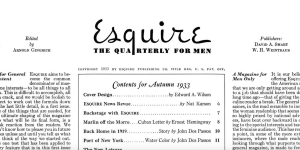 I’m going to go ahead and blame Jonathan Franzen for my delay, primarily because I’ve spent the last three weeks reading “Purity.” It’s a good novel, although not as great as “The Corrections” or “Freedom.” I mention this only because one of the main characters in the book wrote for, you guessed it, Esquire in the 1980s (I’m guessing on this decade).

There is only one piece on “The Greatest Table of Contents of All Time” from the 1980s, and that is Richard Ben Cramer’s “What Do You Think of Ted Williams Now?” which was published in the June 1986 issue. Since I’m reading this table of contents in order, it might take me a while to get there, but I promise it will be before Franzen publishes another novel. 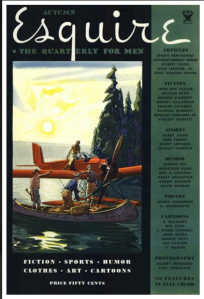 As for Gingrich’s first editor’s letter, it is fairly basic. It lays out what Esquire strives to be, and how it is going to do it. I find this particularly interesting as my journalism students at Ashland University are currently planning a magazine, which we intend to launch in late 2016. In many ways, Gingrich lays out exactly what any magazine must do as it starts up — identify an audience and describe how it is going to engage and entertain that audience.

It’s a pretty funny letter too, especially when it comes to the part about how Esquire is going to cover fashion.

“We have been studying men, and men’s clothes, for many years, and we have come to the conclusion that the average American male has too much inherent horse sense to be bothered very much by a lot of dress rules that nobody but a gigolo could possibly find either time or inclination to observe,” Gingrich wrote.

I’m not sure if this means I can still use the “I saw it in Esquire,” excuse when my wife questions the outfit I put on in the morning anymore or not.

This is just the first of many posts. And hopefully they’ll start coming fairly regularly. Next up will be a post on the Service and Charts section, which includes pieces by Helen Lawrenson in 1936, L. Rust Hills in 1963, and Tom Chiarella in 2003.

Matt Tullis is the author of Running With Ghosts: A Memoir of Surviving Childhood Cancer. He is the director of Digital Journalism at Fairfield University, and is the host and producer of Gangrey: The Podcast.